This is a departure from my traditional video posts, brought about in part by a lack of opportunity to fish this summer. This reminisce is part of a longer piece about fishing with kids. The inspiration was a couple of recent camping trips with my daughters, Sophie and Beatrice. Any comments / suggestions appreciated. 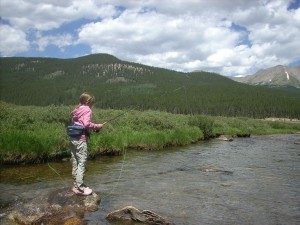 The first time we’d been camping with Soph, when she was two, didn’t have the outcome I’d been hoping for. Kym and I fitted out the truck with a big comfy mattress, and we drove up to a mountain lake 20 miles from town, the last five lurching back and forth up a rutted four-wheel drive road. Eating dinner as dusk settled over the mountains, the air was perfectly still, the mirror-like lake reflecting the deepening hues of the evening sky and darkening mountains. Dimples began breaking the surface, intermittently at first, now with greater urgency. The evening rise was coming on, insects hatching from the depths, the fish rising to gorge on the bounty. Nirvana.

I unloaded my one man pontoon boat from roof of the truck, and carried it eagerly to the 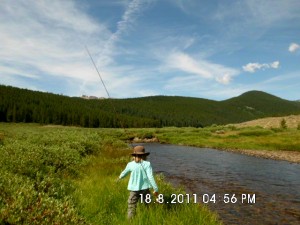 water’s edge. There would be an hour, perhaps an hour and a half, of the kind of dry fly fishing dreams are made of. No time to waste. I hurriedly strung up my rod, fumbling into my chest pack for a fly box when the first wail split the stillness. I turned, glancing back towards our campsite, to see Kym emerge from the back of the truck, shrugging her shoulders.

Figuring if I ignored the potential problem it might go away, I continued tying on a small elk hair caddis, turning back towards the lake. The risers were now working at least half the lake’s surface, a glutinous display of Caligula-like proportions imminent. The second and third wails came in quick succession. Kym was now holding her, standing at the back of the truck, making an eye contact unmistakable in its intent from 50 yards away. I put down the fly rod and walked toward them. “She doesn’t want to stay here. She doesn’t want to sleep in the truck.” She’d just realized camping didn’t mean eating hotdogs by the lake and then going home.

“Sophie honey, it’ll be fun. We’ll look up at the stars, and you can watch Daddy catch some fish.” The last said in hope rapidly turning to despair. She could be a bear with a sore head if she didn’t get her way. She wailed some more, and I remembered there were a couple of other campers around the lake. It was tough enough having my own sense of serenity broken, let alone being responsible for shattering that of others. I wearily trudged down to retrieve the pontoon boat, the lake now a slow boil of rising fish. Loading up, we headed back down the mountain in the deepening night. She fell asleep almost instantly, but the road was too narrow to turn around. Besides, if she woke up and we were back at the lake, there’d really be hell to pay.