“It seems like an exercise in futility to me” said my wife, shrugging her shoulders. Not wishing to dwell too deeply on her observation, I took refuge in the fact that not everyone gets fishing.

On the surface, it was hard to argue with her. The wind was blowing steadily onshore, 15 to 20 knots, gusting to 40, or so said the weather forecast. A group of surfers were huddled in the questionable shelter of some trees along the beachfront, staring forlornly at the messy shore break. The ocean beyond was an iron grey,  a belt of approaching showers blurring the line between sea and sky.

If I wasn’t going to catch any fish, however, the elements were the last thing I could blame. Ignorance headed that list. We’d been in Maui a little over a week, and in that time the weather had been unseasonable windy and wet. I’d been putting off going fishing for several days, waiting for favorable tides and conditions, but had finally decided to strap on my man pants and get out there. 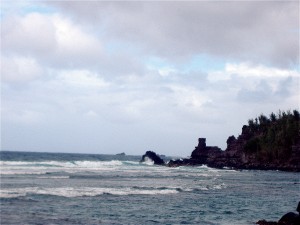 The Hawaiian Islands in general, and Maui in particular, are not regarded as prime salt water fly fishing destinations. The land rises steeply out of the sea, meaning very little in the way of flats for wading, and in many places the rocks sharp, the remnants of ongoing volcanic activity. Speaking to a couple of locals on a previous trip, I’d learned that this time of the year isn’t the best time for finding fish in close to the shore anyway.

I had a nine weight with a sink tip, a handful of clousers and a fresh spool of 20 pound test. I turned to my wife as I got out of the car and replied “I know, but how bad can it be?” In my youth I’d hiked shorelines very similar, armed with a hand line or surfcaster, some heavy weights and a packet of frozen pilchards for bait. Back then, I was fishing for snapper, gurnard and rock cod, bottom feeders mostly.

Here, it was a whole new ball game. The reefs abounded with strange fish of every color combination imaginable, ranging in size from smaller than my clousers to a pound or so. But it was the fish that fed on these guys that I was hoping would be around. It felt good to be in the water, wading out to rock outcrops, leaping from boulder to boulder, timing my movements with the ebb and flow of the waves.

The dark clouser didn’t do much, but after a while I switched to a neon green, easier to see in the overcast, and I started to get a few chasers – nothing huge, and I couldn’t figure out if they were interested or just saying “wtf is that?” The hundred yards or so between the surf break and the shore was a labyrinth of reefs and channels, the water surging and draining, the fish riding the waves in and retreating with the outflow.

Alas, despite the chasers, I couldn’t get a fish to hook up to help counter my wife’s skepticism. An exercise in futility it was, if putting dinner on the table had been the objective. But for a Kiwi boy land-locked in the Rockies, it was great to taste the salt air and experience its sting on my skin, to feel the surge of the ocean against my legs and stand and stare back across the limitless ocean towards home.

So, no photos of fish to share, no tales of Ahab and Leviathan, but how about that sunset? Taken from the deck of our holiday home, through a mai tai infused lense. As I said before, “How bad can it be?”