Following a fifteen degree night in a twenty degree sleeping bag, I wake to a frozen five- gallon water jug, and the realization that I may have chosen the coldest place to camp in the entire valley. Kicking the jug frees up enough water to brew a cup of tea, then, like my dog on the living room rug on a winter’s day, I position myself in anticipation of where the sun will first reach. 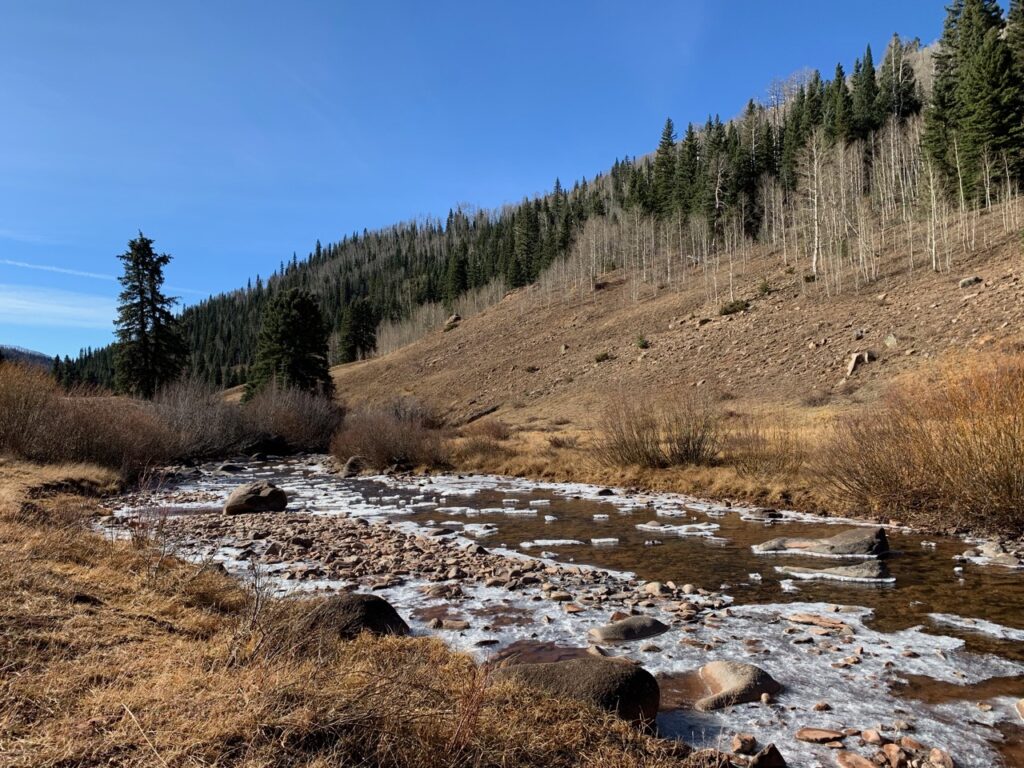 After breakfast I take to the trail downstream. The creek bears all the hallmarks of a low water year—sparse save for the occasional deeper pool, a layer of reddish silt covers the bed, swept clean only where seams of current are concentrated. The water flows gin-clear, and I stop from time to time as I hike to spot fish, for reassurance. They seem few and far between, but seeing even one or two gives me hope that my day may be fruitful. Thin ice shelves have formed overnight, and the fish I do see hold station beneath these, watching the open water. My hope is that, as the sun rises higher and the day warms, the ice will disappear.

The canyon narrows the further down I hike, and trees grow heavy to the water’s edge. Although the trail shows ample sign of having been well used—ATV and bike tracks, boot and hoof prints—I encounter nobody. From the south a small stream, little more than a trickle, is frozen in place, the boulders over which it flows cased in ice. Many places down here will not see direct sunlight for the next several months. 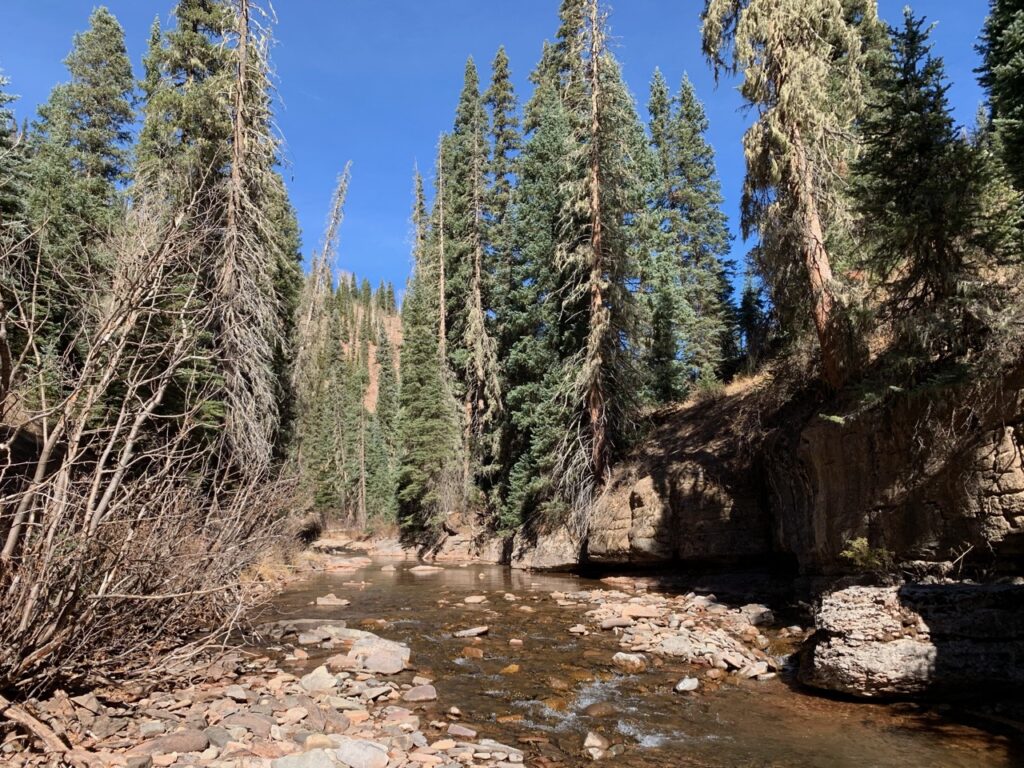 I come upon a clearing where a small meadow opens out, and the transition from dark to bright, the reflection of light off one boulder in particular, brings with it the onset of a migraine. The angry amoeba behind my eyeballs grows bigger and brighter and more jagged, morphing its shape and color. I lie down next to the stream. Using my pack as a pillow, I slip into a half doze as the amoeba does its thing. Van Gogh drove himself crazy, not to mention half blind, trying to paint the sun, and I wonder at the effect on my state of mind if I made it my life’s mission to try and accurately paint in words the sound and soothing of gently running water.

The worst of the headache passes, and I begin to fish my way back upstream. I catch a couple of lovely brook trout, including one large for the stream, with a gaping mouth colored black on the inside of its jaws. I work one pool for a good half hour, trying to tempt a couple of sighted fish with a variety of flies. The closest I come is when one half-heartedly follows a hopper for a few feet, then turns back to its station. I wave the white flag after losing two flies into the same overhanging branch in consecutive casts.

Upon my return, I decide to relocate camp to higher ground, further from the sound of the creek, but to a place where I calculate the sun will reach me earlier, and linger longer. The effort is worth it, my fly rod miraculously survives being shut in the tailgate of my truck, and I sit in the last of the day’s light among the watchful eyes of a small glade of aspens, long since stripped bare for the coming winter. 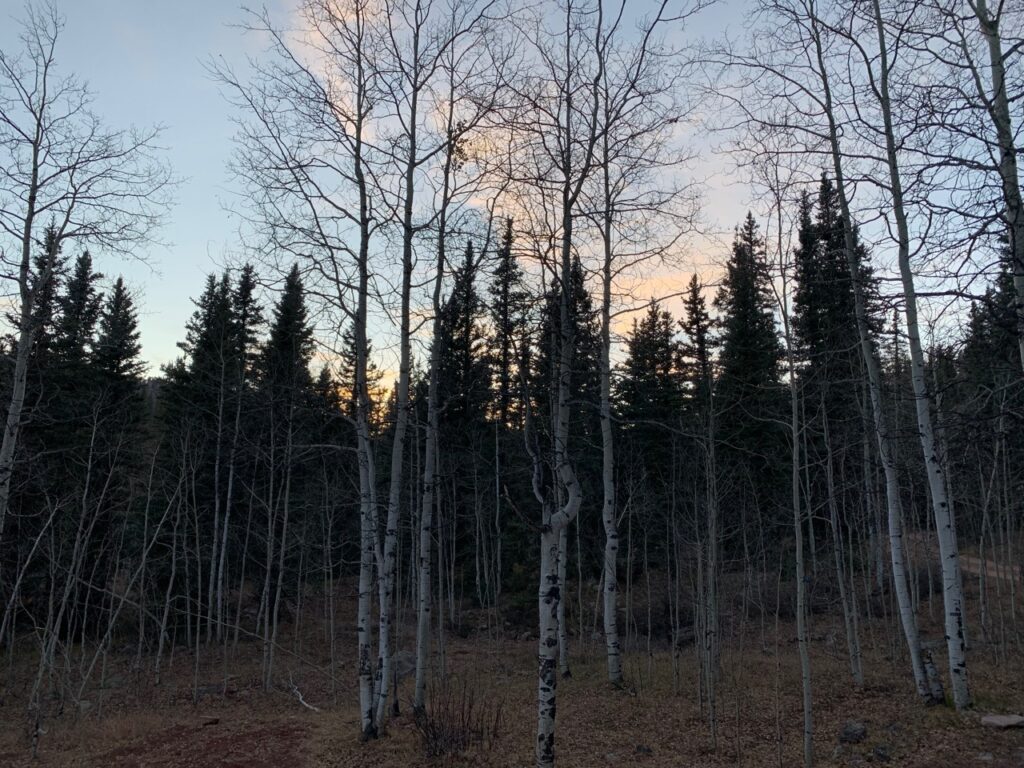 Whiskey warms me, and I reflect that November might mean cold nights and frozen water jugs, but it also means deserted campsites, and solitary streams.