The stream flowed, a succession of riffles interspersed with oxbow bends, meandering across hayfields green with the last cut of summer. The valley through which it ran narrowed toward its head, beyond which the the terrain rose steeply, covered in pine forest.

A gravel road kept to the east side of the valley and we drove until a sign announced public land. Here nature reasserted herself and the stream’s course was marked by willows that grew thick and tall, crowding the water’s edge.

The wind, having left no obvious imprint on the fresh-mowed hayfields, coursed through the willows, bending and flexing them before it. Fishing in wind, while challenging at the best of times, becomes more so on small water with narrow banks crowded with vegetation. 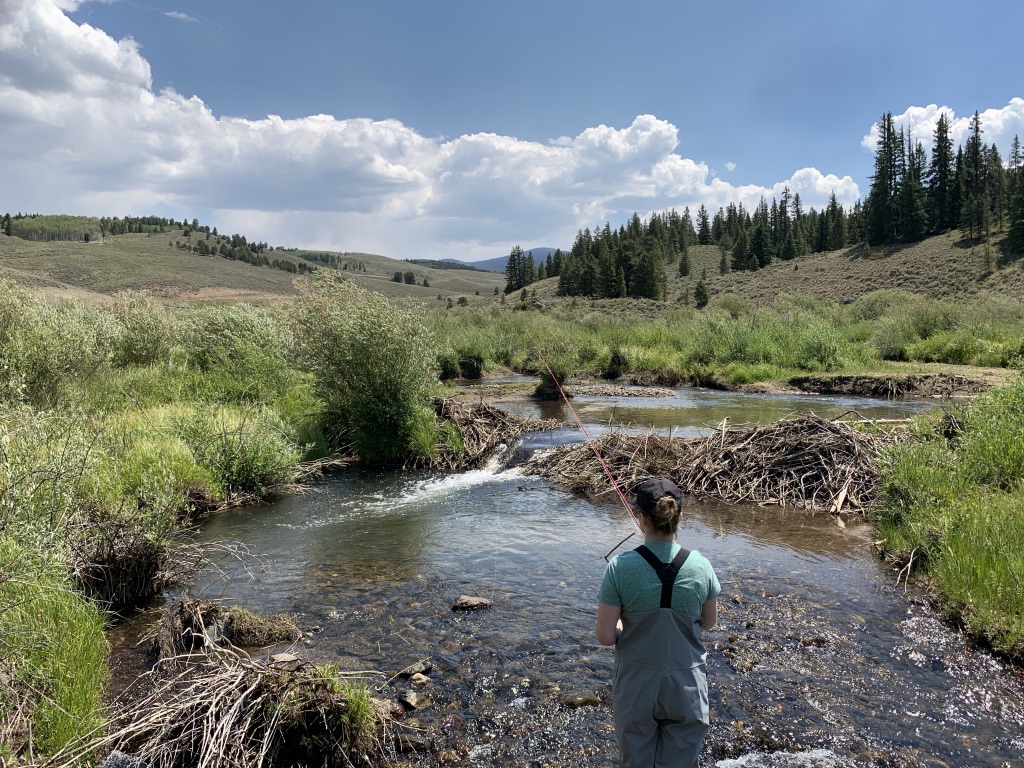 “Don’t get emotionally attached to your fly,” I warned as we assembled our rods on the tailgate of the truck. “You’ll lose a few in the bushes with this wind, it’s just the way it goes.”

We dropped down an embankment, located a gate in a barbed wire fence, and walked to the stream. True to the season, its riffles ran shallow and bony, the only significant depth to be found where water, flowing into a bend, had carved a channel—the sharper the bend, the deeper the cut. We bushwhacked downstream, staying inland to avoid spooking any fish, negotiating old beaver dams riddled with connector channels, and a dried up portion of creek bed which soon led us back to the stream.

She strung her line through the guides, then I took the rod and tied on a dry fly. We’d fished a couple of lakes earlier in the summer, but this was her first time on moving water in years. Moving water means more demand on an angler’s attention—drift, drag and line control require constant coordination, keeping hand and eye continually occupied. This in turn leaves less time for contemplation of the existential void that can be part of still water fishing, where a fly often sits motionless and unassailed, alone on a vast, featureless plane, for as long as one can stand to look at it. 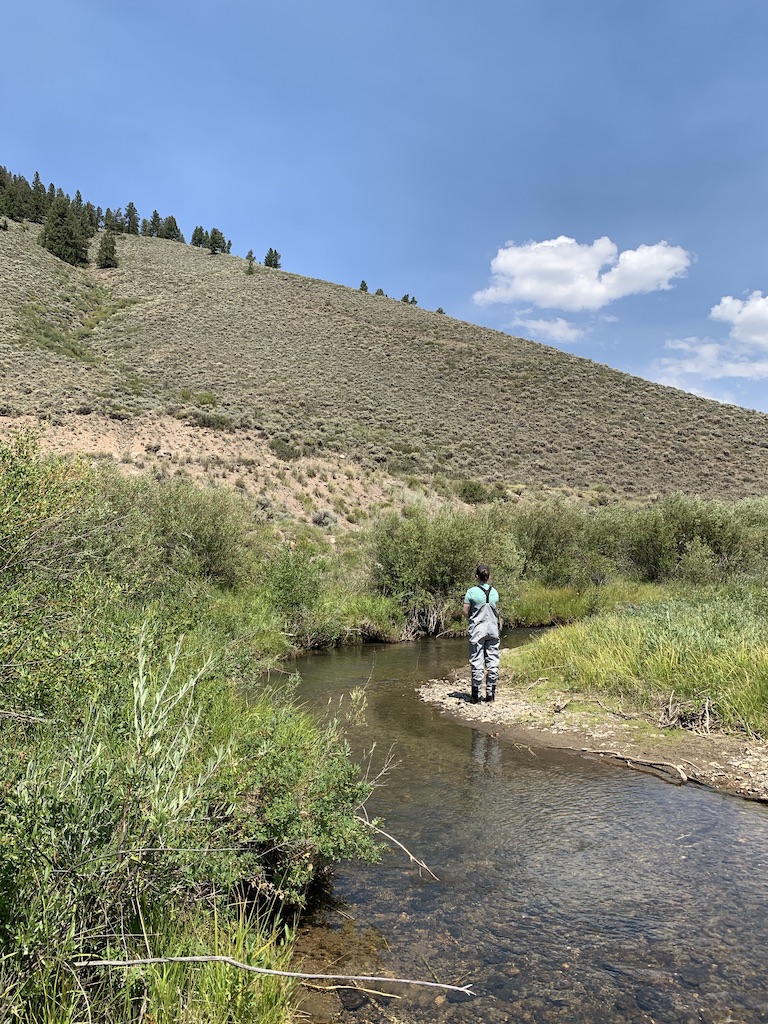 Her first cast blew into the bushes on the left bank, the second into those on the right. I sensed a narrow window of opportunity to catch a fish before a return to a game of gin rummy back at the camper would garner greater appeal. She cast again.

“I aimed over there, but the wind blew the fly over there.”

“Try and compensate. Aim a few feet from where you want the fly to land, and hopefully the wind will take it there.”

She did so, and the wind dropped, landing the fly in the bushes again. I detected a sag of the shoulders.

“This is some of the most technical fishing you’ll ever do,” I encouraged.

Gradually she got into her groove until perhaps every second cast landed somewhere on the water. I encouraged her to see the drift through those times the fly didn’t land where she intended.

“The fish doesn’t know that wasn’t where you were aiming.”

The wind continued to surge and swirl, and a couple of flies were lost to the overgrowth, yet the fish remained reticent to the good drifts.

Finally, a break. We came upon a bend in the stream where a portion of beaver dam had blown out. What had previously been a still pond was now a broad pool with a gentle current seam. Standing on the remains of the dam, and with the wind now directly at her back, she laid out a cast to the head of this pool. Several drifts went unanswered before a brief swirl around the fly announced a take. She set the hook, and a short while later we released a brown trout back to its world.

I too felt a weight lift from my shoulders, as guides do when the first fish is landed and released. I congratulated her on her tenacity.

For the next half hour we took turns fishing our way to the truck, all the while the wind showing scant sign of abatement.

“Well,” I said, “we could keep going on further upstream, or head back to the deck of cards,” knowing I’d be happy with whatever her answer might be.