The tires rolling across fresh snow made a muffled chirp, reminiscent of the soft trill of a flock of grebes, floating on a northern California lake. I thought of that lake, of that most recent summer, and of how quickly the seasons themselves roll, one seamlessly into the other. 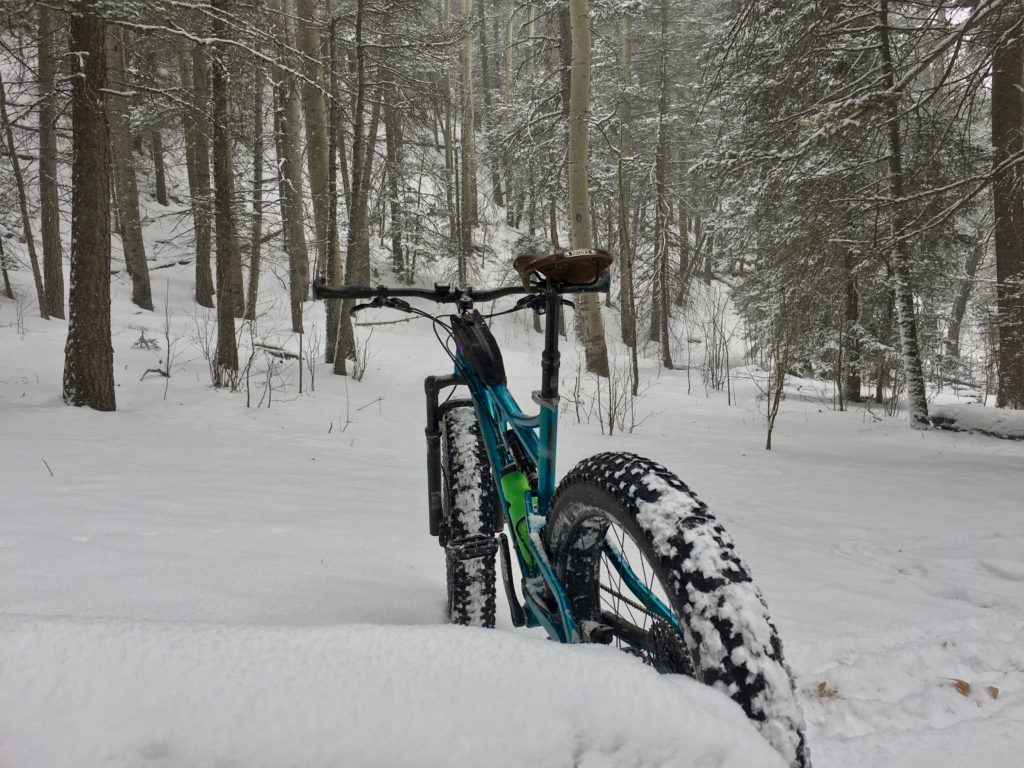 The gradient of the two-track became steeper as it wound up the tapering valley, into the clouds that ghosted through the pines, their tendrils trailing like wispy fingers through the boughs. On a steeper pitch my rear tire spun out on a patch of ice, unseen beneath the mantle of fresh falling snow, forcing me to dismount. I laid my bike down and took the water bottle from its cage. The valve had long since frozen shut, necessitating unscrewing the top. I drank a few sips then stood, and listened. No sound, save the soft murmur of the stream that ran next to the road. Somewhere close a tree creaked against its neighbor, creaked powerlessly against the inevitable. Nothing really dies, I thought, that same tree composed of elements present at the very creation of time.

A soft breeze sighed through the trees. The snow eddied and swirled. The forest stood silent and stoic, indifferent to its beauty. My back began to feel the chill as my sweat cooled. I realized I needed to keep moving up hill, toward the trail. I came to a stream, frozen over, and picked my way across, gingerly from snow-covered rock to snow-covered rock, using my bike as a crutch, the sound of the water gurgling from beneath the opaque veneer of ice. 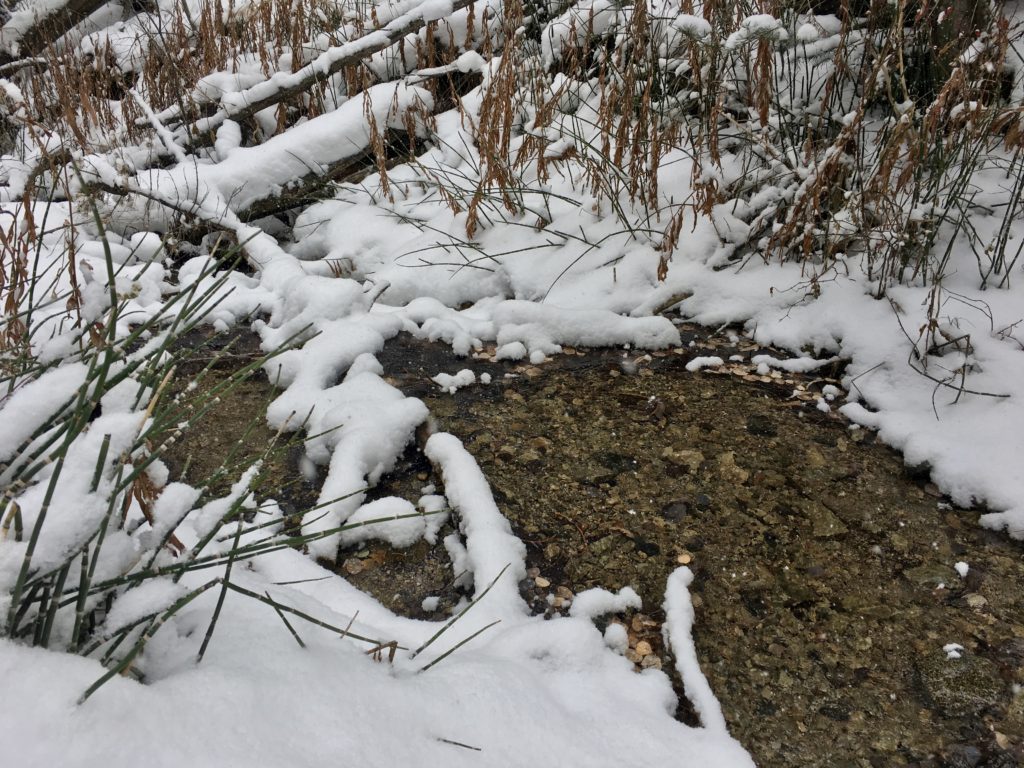 At the trailhead, I leaned my bike against a fallen log, placed hands on knees and gasped for air, trying to restore the equilibrium between my muscles’ demand for oxygen and my lungs’ ability to deliver it. Taking a chocolate bar from my pocket, I bit off a chunk, thinking one mouthful would suffice, underestimating the craving for calories and sugar that physical exertion in a cold climate creates. Next thing, the wrapper lay crumpled, empty in my hand. My stomach, like a dry sponge, soaked the sustenance. I shivered. Time to move on.

The trail formed a thin ribbon through the forest, laid up and down according to the contour of the land. I rounded a blind corner where, years previous, an early-morning encounter with a bear had given me an appreciation of the speed with which such animals can move, and the role blind luck plays in survival. On the dryer, south facing slopes, dense pine gave way to stands of scrub oak, their rust-colored leaves hanging limp, awaiting the next breeze to shake them loose and settle them to their final rest. 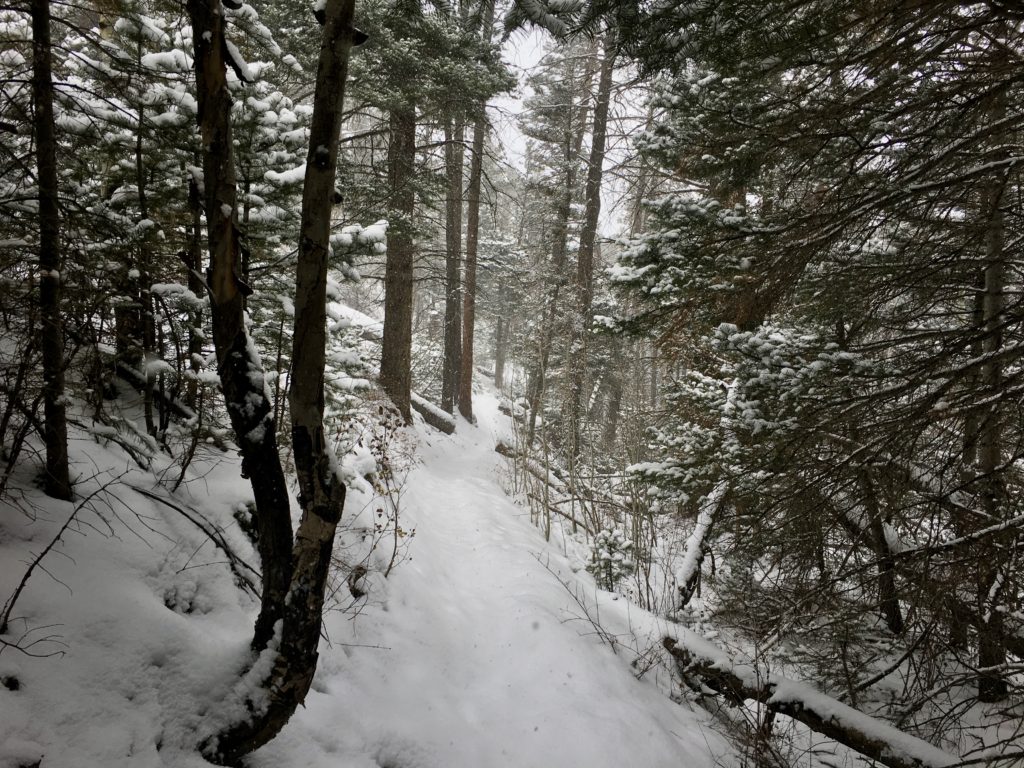 For several miles the trail so wound. Fallen trees criss-crossed a frigid stream, the snow gathering on their topsides standing out like searchlights in the gloom. Finally I reached a junction in the trail and turned downhill toward home, gravity now my friend. Here the trail was less well defined, the snow concealing its landmarks. I followed it in part by instinct, in part recalling its course from those seasons when it is laid bare on the forest floor. Not another soul around, the soft hiss of the bike’s tires on fresh flakes my only company. The snow began to pick up its intensity, and soon my tracks would be covered over, and once they were gone, had I really even passed this way at all?