Skip to content
Never mind the longer days, warmer temperatures and the return of the robins – the surest harbinger of spring is the sight of Harley Davidsons back out on the highway. That, and me getting a hankering to go fishing again. I don’t mind admitting, I’m a bit of a wimp when it comes to winter fishing. If an angler is defined as a jerk on one end waiting for a jerk on the other, this particular jerk doesn’t enjoy freezing his ass off for the privilege. 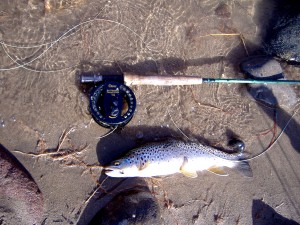 The other day however, the sun was shining, the air calm, and I decided it was time to dig out my gear, head down canyon and reintroduce myself to the river. There’s a spot below Badger Creek that I’ve often admired from the raft, but never taken to the time to linger and work it from the shore, and this seemed like a great opportunity. The canyon here is wide, gradient mellow and the riverbed benefits from longer exposure to the sunlight.
Experience having taught me that goretex waders provide as much frictional resistance as a toboggan on a snow-covered bank, I walked until I found a place where I could pick my way down in the footsteps of another, prior angler. Tying on a couple of nymphs, a big stone and a small flashback pheasant tail, I began working my way upstream, fishing the edges of the seams and the drop offs where the river bed changes from rocks to deep, inscrutable green. It’ll require a few more weeks of warmer weather before the fish begin to shake off their mid-winter torpor. Takes tend to be slow and gentle, so I was careful to set slow and gentle to the merest stutter of hesitation of the indicator.
Over the next half hour I was rewarded with four fish on the end of my line, two of which I touched, the others managing to slip the hook with a combination of their sluggish cold-water writhing and my cold-fingered ineptitude All this played out under the watchful eye of a grey jay, alighted atop a pinon on the far bank. He sat and watched my progress up river, before chuckling his amusement and flying off, disappearing into the tangle of willows on the opposite bank, bringing to mind Bede’s analogy of the life of man as that of a flying sparrow, entering in at one door and quickly out another, briefly “out of the wintry storm and into it again.”
I came to a slow pool with a gentle back eddy, the low angling sun sparkling in reflection on the undersides of the over-hanging rocks, a cluster of midges huddled in the sunlight, flitting and skimming and doing whatever it is midges do on a late winter’s afternoon. Three fish finned and hovered on the sandy bottom beneath them, disinterested in the meagre protein on offer on the surface, instead preferring to stay down deeper in the water column, feeding on whatever nymphs the gentle back current brought their way. They tolerated my stonefly and pheasant tail for about three casts, before they were gone, and it was just me and the midges.
Not wishing to stick around for any more cries of derision from the grey jay, I wound up my line and headed back up the embankment to the truck, mission accomplished, another season begun.

One Reply to “Robins, Harleys and Fly fishing”