It seemed an appropriate way to celebrate the completion of my sixtieth journey around the sun. I’d rise early, head to the mountains, and then with a pack on my back hike to a lake a friend had told me about, located a couple of miles inside a wilderness area. I’d spend the day alone in the high country, reflecting on life, time’s passage, and the contradiction that is the length of the days but the brevity of the years.

The road towards the lake ran straight as an arrow shaft, through the heart of a landscape dotted with silos and center pivots, the scent of wet rabbit brush heavy in the air. To the east a range of mountains rose up off the plain like a wave frozen mid-break, the peaks shrouded in sullen, multi-colored clouds. In the opposite direction, more mountains smudged the horizon, patches of snow capturing the first rays of morning.

I turned west and in what seemed like the blink of an eye the plain was left behind and I found myself driving through steepening countryside clad in pine and budding aspen, the river that accompanied the highway flowing a deep green, filling its banks. After a time I turned off to follow a gravel road that became more potholed the higher it climbed until it ended at a trailhead. On the tailgate of the truck I sorted my pack for the day, stuffing waders, fishing pack, extra clothing, lunch, snacks, water filter….. I shouldered my load and set forth upon the trail. 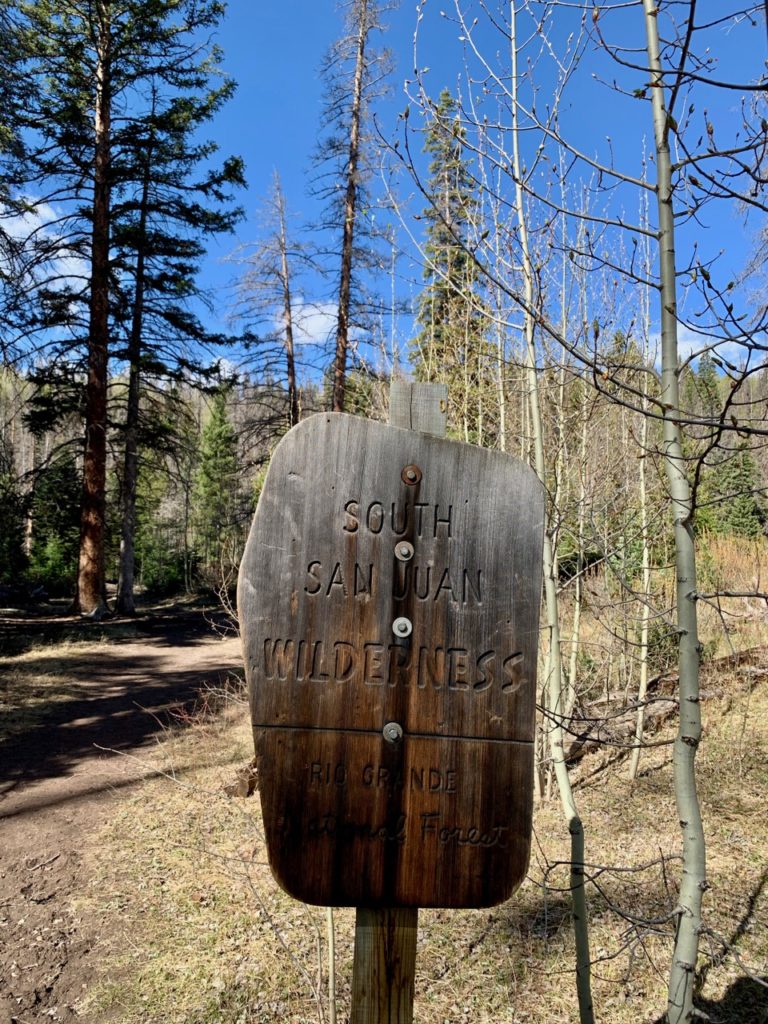 The first mile saw a series of steep switchbacks through pine mingled with groves of aspen, the ground underfoot a damp carpet of rust-colored leaves, the air still dank and fresh with the cool of morning. Next came a succession of small meadows where the trail skirted their perimeters to avoid swampy centers, alive with the chorus of raucous frogs. Here too the viewscape opened to reveal near vertical cliffs of glacial-carved granite with snow still covering any slope with a northern aspect.

My mind wandered as I hiked higher toward the cliffs, from marveling at the sonorous pounding of a small woodpecker on the trunk of a dead pine nearby, to the implications of the greater—but not necessarily better—part of this life now in the rearview mirror.

The final ascent to the lake was made through snow and a stand of aspen with trunks colored olive green. At last I stood upon a promontory and looked out across the lake, shallow in the foreground and deepening towards the far shore where pines crowded close to the water, the terrain then rising steeply to where a waterfall cascaded from a crevice high in the granite wall beyond.

A rustle of brush and movement close to my left startled me from my reverie. A golden eagle lifted off from the undergrowth ten yards away, flying directly toward me as it gained steerage before turning, revealing fully its mottled underbelly and wingspan before sweeping low across the lake. Heart still racing, I watched for as long as I could as its form receded, blending into the light and shadow of the far shore.

I sat and watched the lake. A breeze picked up, stirring the water’s surface. In a shallow bay near the outlet a weathered beaver dam breached the surface, and I made out the silhouettes of a couple of fish cruising close to shore. So far, so good I mused as I began assembling my rod, keeping a keen eye on the fish.