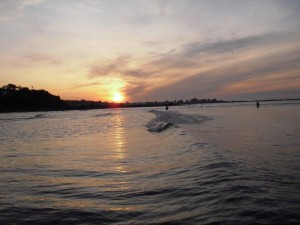 Going Coastal……To say fly fishermen are passionate and somewhat obsessive, is like saying Brittany Spears is confused and a bit flaky. Certainly, the degrees of these qualities are subjective, and the line between, a variant. Many moons ago, while living in what some might consider, “trout fishing nirvana”, guiding and fishing world-class Western waters, I stumbled upon, and became consumed by, sight-fishing for lowly carp, a tale for later, but, you get the idea. This is the story of my latest discovery….

When my sole companion of eleven years, my beloved hound, suddenly died, I knew I needed a diversion, fast, to avoid incessant self-pity and insidious wallowing. Hoping for a “clearing in the forest”, “an open window”, or my personal favorite, “daisies to sprout from a turd-pile”, I had a revelation. I jumped in my decrepit pick-up truck and bolted three hours to the Maine coast to “visit” my sister who had been stranded by her friends in the midst of a Nor’Easter, and still had a few days left on her cottage rental. To put it in perspective, to a Vermonter, an hour’s drive is considered a day-long excursion, where as in Colorado, it’s more like driving to work. So, after reaching the coast, ever the loyal, loving, brother, rather than go directly to my lonely sister…first stop, fly shop.

Though, I had read accounts, and viewed my share of ocean fly fishing on vicarious outdoor-adventure T.V., for this one-dimensional fresh water five-weight slinger, the prospect of heaving a nine-weight in the vast blue sea, was, pardon the pun, uncharted waters. Upon entering the shop, and declaring my zealous intentions, the young owner gladly informed me of the where, what, and how, of pursuing stripers and blues. Apparently, I “talked the talk”, because he offered me the use of his rental nine wt. and reel, no charge, for the few days that I would be in town.

Now, this is where I’d prefer to tell you a grandiose yarn of beginner’s luck, like the time that a client of mine hooked up while standing in the Arkansas River, talking on her cell phone, but this was not the case. I did, however, begin to decipher the nuances of casting a stiffer rod with sinking line, and the futility of fishing certain tides. The excitement of exploring a new realm, and a mere six-second “arm wrestle”with some sort of finned ocean-dweller, fully ignited my latest indulgence.

Two months later, my transformation was complete, I had bought a reliable vehicle, the rental equipment was scrapped, and replaced with a top shelf set up that I could call my own, I had even upgraded my leaky bear-torn waders(wasn’t wearing them at the time!). My world now revolved around tide charts, and fenagling my schedule between my business and my “regular” job, to accomodate my weekly jaunts to the coast. Two A.M. excursions to catch the prime of an out-going tide were now second nature. 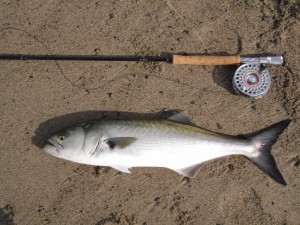 This September morning was no exception. I pulled up to my favorite, semi-remote beach, an hour before sunrise, sufficiently caffeinated, in search of the ever-predacious nocturnal stripers. It was “dark as a pocket”, as I sloshed, with minimal trepidation, through the waist-high depths of a sand bar that bordered the river mouth leading to the breaking surf. Never is fly-fishing more tactile and rythmic than in the pitch black, the sensory powers at their peak. Trusting my feet to feel the gradiant of the bottom, and my legs to judge the strength of the current, I slung my black deceiver into the mystic when, before even one strip, “Thunk”!  No need to manage my line, in the time it takes to say, “fish on”, it was peeling from my reel. Tenish minutes later, I was mouthing my mag-lite, snapping a photo of the first striper of the day, before the average Joe had entered his REM cycle.

After three more landed fish, and a few “d’oh’s”, my new found, fellow fish-crazed fishing bud, Ray, appeared in the emerging light of sunrise. Our friendship had formed through respect for each other’s shear tenacity, both of us, typically beng the first to show, and last to leave…..that, and the fact that I had the lone can of bug spray, one mosquito-infested night. Between Ray’s spin outfit, and my fly rod, the rifle and bow of the fishing world, we pretty much had the options covered. Our fortunes continued to be stellar, well into daylight and dead low tide. With the tide coming in, a time when many a fisherman opts for bacon and eggs, Ray and I migrated a short trudge away, to the surf. As if a switch was flicked on, suddenly, the winds were near gale force, to borrow a line from “Seinfeld”, “the seas were angry, my friend”. Squaring up to the waves, I felt like Pedroia staring down the “Green Monsta‘”, at Fenway. Fearful projectiles of baitfish burst from the froth in front of us, a virtual flying buffet. Ray hollered, “Blues!”, and I frantically zinged my artificial “meal” into the frenzy, in search of a voracious glutton…..Doink! My entire rig was severed, victimized by the toothful fury of a bluefish. I scrambled to find my last remaining steel leader, which was permanently fixated to a top-water popper. No time for a false cast, it was, bang, zoom, my reel was singing…..an ACDC tune. Within seconds, I was into my backing, ducking under Ray’s own preoccupied, bent rod, attempting to slow down this blue speed boat to London. When I finally landed the source of the euphoric mayhem, I couldn’t help but wonder how a dogless bachelor could possibly have more fun, and immediately began calculating a way to buy a permanent place in the ‘hood. Passionate? oh yeah….Obsessive? possibly….Focused? absolutely.

Focus: a center of interest or activity.