Just the experience of fishing can be pleasurable, satisfying, and enriching – even on a slow day when few fish are actually caught, and none of the larger persuasion. The mere act of casting a fly on a serene mountain lake, in a picturesque canyon, or into a vast oceanic estuary with few results, always trumps, say, developing carpal tunnel pounding on a Dell keyboard in a stifling cubicle.

For this weathered fisherman, days like that have sufficed on occasion, but the shocking truth is, I never did “read” Playboy for the articles, nor will I ever watch NASCAR to simply observe superb racing strategy. The reality is, ultimately I’m in it for the adrenaline pumping, forearm burning pucker factor that only a full-figured, crash or burn fish can bring. Thus, when I moved back to southern Vermont, where trout are usually described in inches, not pounds, like in the West, ventures outside the county would be necessary for the larger, spotted, finned creatures. 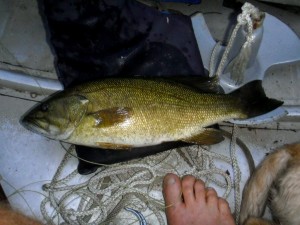 Like the wily coyote, I learned to adapt to my surroundings, fly-fishing for green fish(bass), a short drive away, and they fulfilled my aforementioned “needs” on many occasions. Recently, though, I decided that I had to at least investigate the tales of “trout with shoulders” within my own state. For the geographically-challenged, Vermont is a piddly three-hour drive from bottom to top, bordering Canada. I happen to live in the most southerly “big” town, Brattleboro. Naturally, the stories of hefty trout come from the northern most reaches, a remote region called the Northeast Kingdom. I am a fifth generation Brattleboroian, and when I ventured to the Rocky Mountains in the mid 80″s, technology was still in its’ pre-pubescent stages, and the culture was roughly a year or so behind such “flatland” cities as Boston.

Since returning, nearly two decades later, my hometown has evolved into an eclectic, progressive, mostly liberal entity. By Vermont standards, a bastion of civilized, cultured humanity. Brattleboro was the only town in the nation to pass and ordinance making it legal to arrest George Dubya, and his side-kick, Cheney, if they set foot in town. Public nudity is also legal. A recent sighting of a sweaty biker in Full Monty, pedaling downtown, lent credence to the notion that most of the human population shouldn’t be allowed to be naked in public…or private, for that matter! Coincidentally, both Brattleboro, and my adopted town of Salida, CO, have been listed on the same two national lists as top art, and outdoor towns, respectively. Unfortunately, the once prevalent dairy farms have fallen by the wayside, spawning an annual event of “capitalistic brilliance”. It’s called ‘The Strolling of the Heifers’, where herds of unsuspecting bovines are paraded up and down Main street, in the sweltering heat of June, to the delight of up to 50,000(no bull) oblivious human “visitors”. Somehow, I have managed to avoid this mass exhibition of farm animal urbanization. Call me old school, but I choose to observe my meat and dairy chewing on its’ cud in a nearby pasture.

The eastern border of my home town, and Vermont, for that matter, is the Connecticut river. Slow moving and wide, it accommodates every realm of aquatic recreation, from canoes and kayaks to water skiers. Virtually all species of freshwater fish populate the river, but it was to the headwaters that I needed to travel to seek the cool-water loving, spotted fish. Off to the Kingdom I went. The journey north was like a time machine to my younger days in southern Vermont – pastoral, pristine. A vision of mountainous green, where silos are the high-rises. Of course, along with remote demographics, come perceptions of reclusive human populations.

Appalachia, references to the iconic movie Deliverance, and weddings with only ONE large family section come to 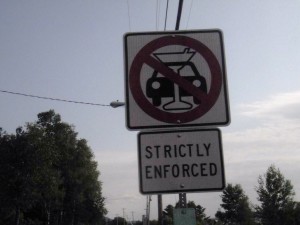 mind. Truly, there were some marked indications of a lurking red-neckish presence: a monstrous truck, requiring a ladder to drive, parked at a church, for instance. Ambiguous road signs that could be construed as a deterrent to drinking martinis, rather than beer or moonshine….a clear affront to suburbanites! All in all, I find that in this new millennium, it has become increasingly difficult to determine who is an actual red-neck, since cell phones create an appearance of civility. The few residents of the Kingdom that I did meet were generous, intelligent, and genuine. Label them what you will, they were my kind of people. 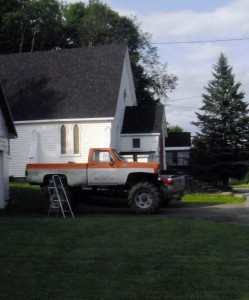 The fishing? Well, I had to settle for reading Playboy for the articles, so to speak. I caught a few fish, and had one fly-spitting sayonara from a leaping burly brown – enough to warrant a return trip in the colorful fall splendor. Typically, I have a plethora of excuses for my lack of fortune but maybe, like another red-headed guy with an overbite -Austin Powers- I’ve just lost my mojo baby….for catching trout, anyway. For the wild-eyed, hair on fire kind of fish fight I desire, I will once again turn to the pursuit of fish of the green or striped variety, a secluded lake, or the wild blue sea, in this wondrous land of fishing options.