This world of ours is full of idealists and dreamers, always has been. Perhaps, we wouldn’t even be here today, if that confused sole, Columbus, hadn’t sought out to discover India…er, America. People are constantly searching for their idea of the promised land,  reaching the once unfathomable goal, or at least seeking something that they think is better than what they already have. When an intellectually challenged Alaskan beauty queen can come within a half-decent running mate and a heart attack from being Commander in Chief, anything seems possible. The supreme angling adventure is most definitely a relative term, and I will spare you any philosophical ramblings, but I can assure you my recent personal quest was not nearly as profound as discovering a new continent, or becoming leader of the free world. 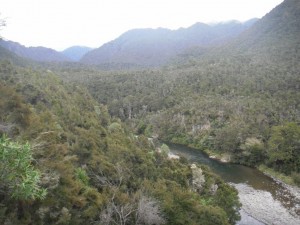 Certainly, I’ve had my share of stimulating experiences while ice-fishing, but this past January, while standing on a frozen Vermont lake in the midst of a white-out, I couldn’t help but contemplate my plan for the consummate winter fishing excursion…..go to New Zealand. It was not to be my first New Zealand rodeo, in fact, my third, so  my expectations had been adjusted accordingly. My affinity for the country, and Kiwis, in general, is deep-seated, and goes beyond the average American’s intrigue for their dialect alone. Of course, years ago, when a Kiwi vision  uttered the words Oh, I’m sorry, but I have a boyfriend, and we’re quite serious”, though I’d been shot down in countless accents, somehow, hearing the down unda’ version, didn’t sting quite as much. Most every Kiwi that I have ever met, has a laid back, yet adventurous spirit, and a wry sense of humor, attributes I can truly relate to. Hence, two of my favorite longtime buds happen to be Kiwi, and fortunately, one of them resides there. 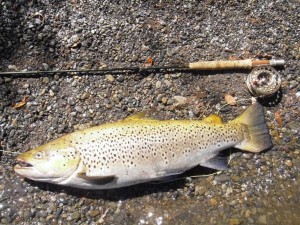 In the fishing world, the general consensus is that New Zealand is a land teeming with trout “too big for the pan”, and having been there before, I am not one to dispute the notion. On past trips, I had managed to land enough browns and rainbows to justify the seventeen hour travel marathon, repeatedly revealing that there was no C-4 in my shoes, I had no exploding toothpaste, and my hemostats were not some sort of ninja death device. My aspirations for this visit were fairly simple, land a fish over six pounds, and find a back country river to camp on, with a minimal amount of fishermen, and a multitude of burly aquatic athletes.

February 3rd, donning shorts and flip-flops, I arrived at my image of paradise, stunningly beautiful  Taupo, the north island’s hub of fly fishing opportunity. After the obligatory stop at “Rent a Dent”, to pick up my bush-wacking mobile, I pulled into my “far away family’s” driveway, where I was greeted with exclamations “Pinky!”, from my friends’ two precious daughters, up on their deck…ah yes, home. Next, I settled into the all too familiar, “McLeod man-cave”, a combination, basement, boathouse and recording studio, complete with futon – perfect. Then, it was off to my mate Steve’s fly shop, to get the low down. He assured me that the Cicada hatch was full-bore, and I would be in the thralls of a fly angling “perfect storm”, like floating juicy pork chops over fish that could eat like Kirstie Alley!

I decided that I would devote the first few days to commuter fishing, and try to to land a monsta’ on the the infamous Tongariro, where behemoths typically dwell, moving up from Lake Taupo. On just the second outing, my first goal came to fruition, when an 8 lb. brown glutton munched my special of the day, a cicada. Now, this is where I describe a battle of epic proportions….well, he did fight like Ali….in 2010. Fat but lazy, a fine picture, though, and my buddy did mention him in his Taupo Times column, so I knew it was a worthy fish, even by New Zealand standards.

On to my next goal of back-country fishing satisfaction. I should explain that half the battle for this Americanized country boy is deciphering the baffling names of the rivers and towns on the maps. While fishing the Tongarirro, in the town of Turangi, I met a fine ol’ fella from Turanga, throw in his sometimes unintelligible Kiwi dialect, and my simple inquiry of where he was from, morphed into an Abbott and Costello routine. So, after a few futile days of careening through the bush, driving on the “wrong side” of the road, sitting on the “wrong side” of the vehicle, though exhilarating, I was finding nothing but high, unfishable water. 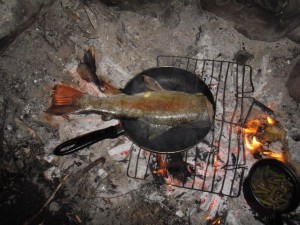 Finally, regardless of some conflicting reports, I decided to venture to the remote headwaters of my all-time favorite river, the mighty Mohaka. Fully loaded, with borrowed camping gear, scrummy mix(trail mix), and mouth watering meat pies, off I went. Despite a harrowing river crossing, where I recalled the question posed to me by my prominent Colorado Kiwi mate (we’ll call him “H”), “Pink, you know the difference between a 4 wheel drive and a rental? A rental can go anywhere!” I happened to have both, like Moses at the wheel…kawoosh! A short time later, after a  2km hike from the trailhead, through a symphony of cicada, down to the clear, wade-able water, and I knew I had found “IT”. I’m at a loss for superlatives to describe the following four days and nights, only to say it was truly the epitome of fishing and camping decadence, nary another sole or predatory creature, for that matter, and a boundless supply of 3-6 lb fish, each providing one spectacular joyride after another. The only obstacle for this hungry camper, the fish were, literally, too big for the pan! Yes, virtually any New Englander can achieve winter fishing of orgasmic proportions, all they need is some money, time, and it doesn’t hurt to have friends in key places, because in February, New Zealand grass is ALWAYS greener.

5 Replies to “The grass is always greener…. a theory of relativity”