We paused to refuel and rehydrate at the foot of the final ascent towards the lake. A furrow in the snow among the trees denoted the course of a stream. In two places its waters were exposed, flowing sparse and crystal-clear over a rust and tan bed that seemed to glow softly in the surrounding white. A fallen log lay across one of these patches of open water, across its topside a winter’s worth of snow accumulation shaped by the elements into the form of a breaking wave, frozen in time. 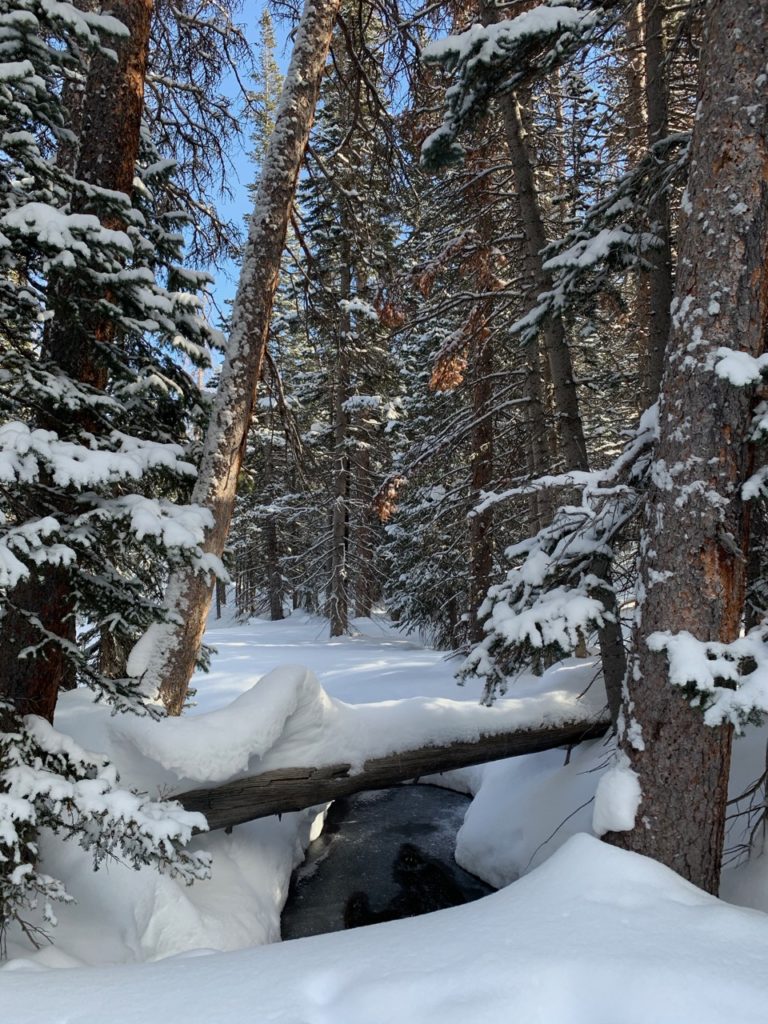 “What have you got to eat?” she asked.
“The food I brought for myself,” I replied. “You?”
“I want to see what you’ve got first.”
I rolled my eyes and showed her my selection of energy bars, and she chose out her favorite.
“I knew you’d have one of these,” she smiled.

We ate in silence, each mentally preparing for the aching calves, burning thighs and over-taxed lungs that would accompany the next half-mile of trail.

“I usually put my head down, just focus on the ground right in front of me, and count off a certain number of paces—one hundred, two hundred, five hundred, whatever—before looking up again. Other wise it seems you never make progress. Same when I’m grinding my way up a long climb on my bike. My breathing gets into a rhythm, and it seems to go by quicker.” 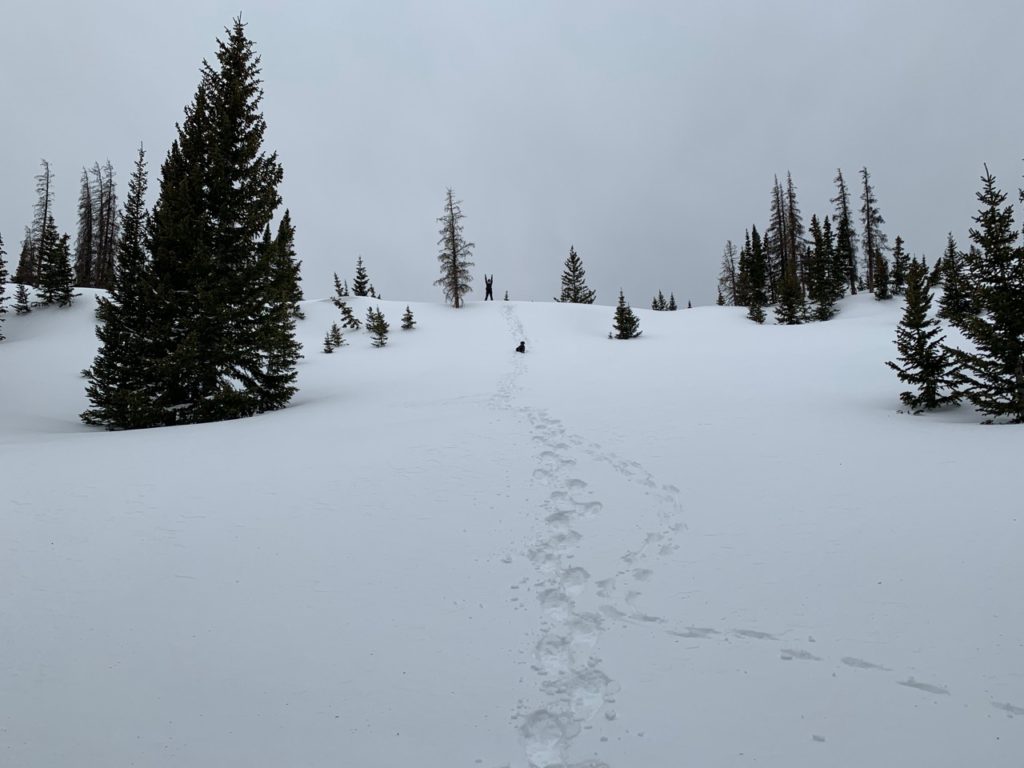 We re-fastened our packs and began the ascent, one foot in front of the other, the snow crunching softly beneath our snowshoes, the fluctuating tightness in my calves and shortness of breath a reliable barometer of the changes in gradient of the trail
.
“It’s like quarantine,” she observed as we trudged. “If you look too far into the future, the end seems a long way off. I’m trying to take it one day at a time, one step at a time.”

I knew she was missing that part of her life, the camaraderie of her housemates, the interaction with professors and fellow students, the clubs, the vibe and bustle of the city. It meant making the effort to get out and move, breath fresh air, and return home with muscles tired but mind rejuvenated all the more important.

A quarter hour later, we stood at the foot of the final push, presented with a choice. Beyond the ridge line in front of us sat the lake. A prior hiker had broken a trail that switched back and forth to the top, or we could take the direct route, shorter but steeper.

I nodded, and we took the straight approach, scrambling on all fours the last few yards until we stood atop the ridge and looked down on the frozen expanse of the lake. Across the far shore the ground rose steeply again, above tree line, to the spine of the Continental Divide, the distant snow fields overhung by several ominous-looking cornices. Mottled grey clouds blotted out the sun, flattening the light and speaking of an impending storm. 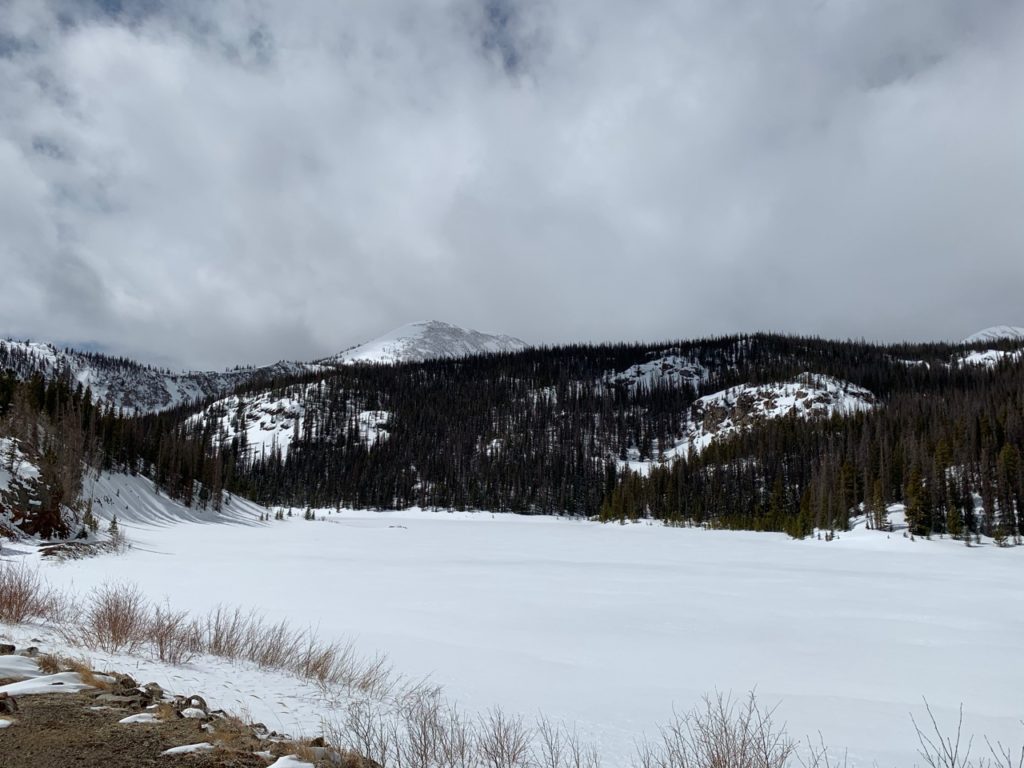 We descended to the shore of the lake and drank once more while the dog cavorted about on the flat ground. Three quarters of the way across, a dark patch in the ice gave the first hint of spring’s thaw, of light at the end of the season’s tunnel. The wind blew, as ever, but not with the same bite as in the the heart of winter.

I called in the dog off the ice, and took in the view one last time—such time and place retains memories more special with no other person in sight. We turned our backs and began the descent from the ridge.