“Are you sure you don’t want to put the boat in the garage overnight? It feels like rain, maybe snow.”

Not for the first time in my life, I should have listened to the Voice of Wisdom, or Wife, as she is more frequently known. 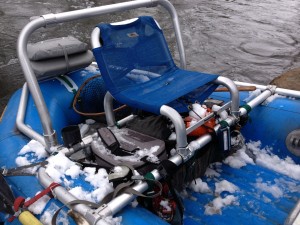 Next morning I reminded myself of this exchange as I shoveled and swept several inches of heavy, wet snow from the boat, more falling from a leaden sky. Common sense would have dictated pushing the trailer into the garage and going back to bed, but over the years experience has taught me that sense and fishermen often share little in common. In my own defense, I would like to point out that had I not being getting paid for rowing the boat, I would have been back between the sheets in an instant. As a guide however, my motto in such circumstances has always been that if the fishermen are dumb enough to want to go, I’m silly enough to take them – an attitude owing as much to relative poverty as much as anything.

The thing I remind myself in such circumstances is that for me, this is just another day at the office. For the guy who has driven here from Ft Worth or St Louis or worse, Oklahoma City, this is a once or twice a year event and he is not going to let a little snow discourage him – at least for the first half hour, after which the realities of a day spent sitting on a raft in below freezing temperatures often starts to sink in. There is also an element of long-dormant teenage macho that comes to the surface, fly shop bravado that sees the fishermen stand around in a jocular group, reassuring themselves that all is well, and they are not going to let a little snow put them off going fishing, like someone from California would. 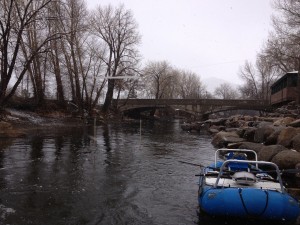 We cut a faintly pitying sight at the G Street boat ramp Sunday morning, rigging rods and stowing gear while the snow swirled. Even the kayakers there for the slalom competition seemed to look at us with bemusement. If there was a silver lining to the cloud, it was that the extra moisture had helped to bring the river up from its previous day’s low of 170 cubic feet per second to somewhere around 200. The drought of 2002 served to lower the bar with regard to what was considered a viable water level to conduct commercial float fishing trips, and it seems 2013 is destined to lower it further. That year was the last year I guided commercial whitewater trips on the Ark, and the thing savvy guides learned above all else was that their attitude was the sole determinant on whether or not people had a good time. Some guides carried with them a small black cloud, lamenting the state of the river, while others looked for new ways to have fun and entertain. That year was my best for tips. So far this year, while the monkey on the oars has had to work harder, the fishermen are having as much fun, and catching as many fish, as any other.

By the time we reached the Stock Yard Bridge the clouds and snow flurries had moved on, pushed out of the valley before a frigid six-layer wind that bit at any exposed flesh and made a mockery of accurate casting or mending. At such times one takes solace in the fact that, as a downstream wind, it was pushing us ever closer to the take out, which we reached tired and happy, miraculously right around beer thirty.

One Reply to “You take what the river gives you”